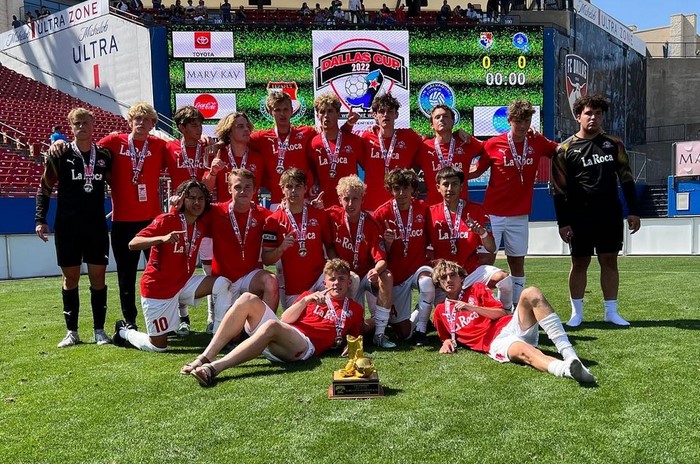 Our La Roca ECNL U19 Boys coached by David Chevez became the first ever Utah team to win Dallas Cup yesterday after clenching the win in the final championship game. Dallas Cup is the most prestigious and competitive tournament in the country and we are proud of their hard work bringing home the championship! SoccerWire.com showed our boys some love in their most recent release:

“The 1:30pm match was the 19-Under final between La Roca FC 03/04 ECNL out of Utah and FC Dallas 03 Premier. Despite going a man down in the first few minutes of the match, La Roca FC pieced together a brilliant performance. Forward Braden Bennett showed his prowess in the air with a pair of headed goals in the 42nd and 55th minute. FC Dallas’ Eduardo Cerna pulled a goal back in the 69th minute, but it turned out to be a little too late, as La Roca FC was named 19-Under Dallas Cup champions, becoming the first ever champion from the state of Utah.”

The boys won this game by playing 87 minutes with 10 players due to a red card in the first moments of the game. La Roca’s name is up there with the best of the best of the country!
We’re so proud of our boys and our club. You can read more about the historic win at the Dallas Cup Championship games in the press release picked up by the Associated Press  HERE